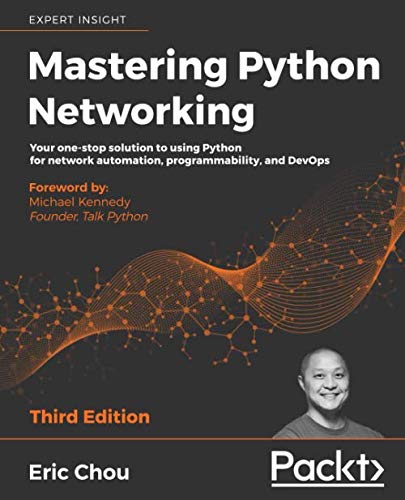 New edition of the bestselling guide to mastering Python Networking, updated to Python 3 and including the latest on network data analysis, Cloud Networking, Ansible 2.8, and new libraries

Networks in your infrastructure set the foundation for how your application can be deployed, maintained, and serviced. Python is the ideal language for network engineers to explore tools that were previously available to systems engineers and application developers. In Mastering Python Networking, Third edition, you'll embark on a Python-based journey to transition from traditional network engineers to network developers ready for the next-generation of networks.

This new edition is completely revised and updated to work with Python 3. In addition to new chapters on network data analysis with ELK stack (Elasticsearch, Logstash, Kibana, and Beats) and Azure Cloud Networking, it includes updates on using newer libraries such as pyATS and Nornir, as well as Ansible 2.8. Each chapter is updated with the latest libraries with working examples to ensure compatibility and understanding of the concepts.

Starting with a basic overview of Python, the book teaches you how it can interact with both legacy and API-enabled network devices. You will learn to leverage high-level Python packages and frameworks to perform network automation tasks, monitoring, management, and enhanced network security followed by Azure and AWS Cloud networking. Finally, you will use Jenkins for continuous integration as well as testing tools to verify your network.

Mastering Python Networking, Third edition is for network engineers, developers, and SREs who want to use Python for network automation, programmability, and data analysis. Basic familiarity with Python programming and networking-related concepts such as Transmission Control Protocol/Internet Protocol (TCP/IP) will be useful.

The author Eric Chou has the following credentials.